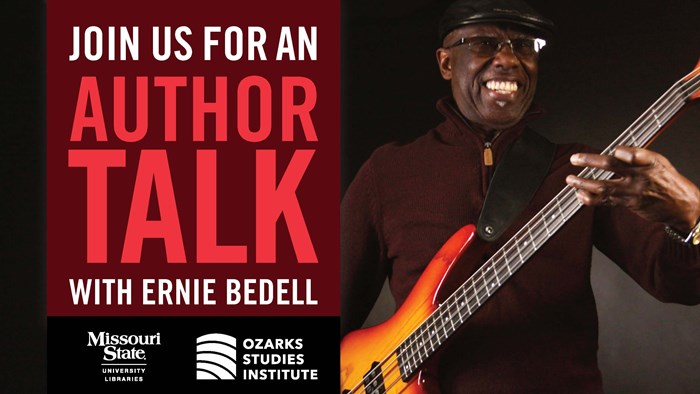 The Ozarks Studies Institute, an initiative of the MSU Libraries, will host a free and open-to-the-public discussion with Ernie Bedell as part of its ongoing author talk series.

Free parking will be available in Lot 19, which is located at 919 S. John Q. Hammons Pkwy.

During the talk, Bedell will discuss his recently published book, “Generation B Music and Melodies.” The book tells the story of the Bedell family who, through many generations, contributed to the local, regional, and national music and songwriting scenes. The contributions of other talented musicians and singers, such as BeBop Brown, Dallas Bartley, and the Philharmonics, are also featured in Bedell’s book.

More on the author

Bedell, an accomplished musician, was born into a large, extended family of musicians and performers in the Springfield, Missouri, area. He’s played bass for a variety of bands since the 1960s, including The KC Express, which toured from the Midwest to California and had a hit song in the mid-1970s titled “This Is the Place.” His solo album, “Let the Old Man Play,” was released in 2016. He plays with the Arthur Duncan Jazz Trio and the ABS Band among his other current pursuits.

Thanks in part to a grant from the Route 66 Corridor Preservation Program of the National Park Service, the MSU Libraries conducted an oral history interview with Bedell in the fall of 2022. The interview can be watched on the MSU Libraries YouTube channel.

The Ozarks Studies Institute, an initiative of the MSU Libraries, seeks to preserve the history and culture of the Ozarks by fostering a comprehensive knowledge of the Ozarks people and their heritage.